As part of their Construction Programme at the Central Devon Academy we were actively looking for a live project where the students could go and practice some of the skills they’d been learning in the workshop. Ideally we wanted to work somewhere within the community away from the school site. The project needed to embrace as many aspects of the construction industry as we could, enabling the students to learn as many skills as they could prior to leaving school and maybe gaining a job or further education in the industry.

A member of staff at Stansfield mentioned he had a child at Tedburn St Mary Primary school and that they were looking to build a potting shed to enhance their gardening lessons. The school was not too far from Exeter and provided us with an ideal start we would need, we had found the perfect candidate for our first project!

We discussed the plans for the potting shed with the head at Tedburn Mr Andy Keay, we discussed the potential ideas we had and the students soon came up with a design. We went to a local supplier for the timber and came up with a price for the materials and with the assistance of Pat from the school administration we soon gained a further 20% discount! The materials we needed were due to be delivered early in the New Year, so with willing students, a fantastic location with the ideal project we were ready to go.

Work started early in the January term, as the students timetables allowed we would take the 20 minute journey out there 2 or 3 times a week. Work started at a blistering pace and we soon got the outline of a structure up, no more than a few weeks later and with the hard work of the students we had the roof on and at last we were able to work in the dry. Work then continued blocking up the back of the structure and creating a large blackboard for the primary pupils to use during their gardening lessons, we also had benches to construct along one side of the structure and a simple potting bench that we built in the workshop and brought to site.

By early April and with a few other little jobs to finish off we had completed our first project! The students involved showed great dedication and effort towards the project and can be proud of what they achieved. We’ve delivered a new potting shed to the to Tedburn Primary school and hope that they have many years happy use out of it, on our last visit to the school only this week we were glad to see that it was already in use by the children.

Building on the success of our project Tedburn school have asked us to build them a new outdoor classroom. Are Stansfield up to the challenge? Of course we are, plans already decided, materials on site and project started with some heavy lifting on 26th April 2017. Look out for future developments!

We have been delighted by the work/projects that have been carried out by the staff and children Stansfield. The potting shed that has recently been completed is already being well used to by the children in school, they really enjoy having the space to start growing their own plants. The whole potting shed project has been successful, communications between ourselves and Stansfield have been excellent throughout. The children who have been into our school from Stansfield have worked hard and developed the area into a useful space for us. This has led to the next project in school, an outdoor learning classroom, which will replace an old seating area on our field. This has started already and we look forward to its completion. The school would really like to thank Wayne and all those involved for their hard work so far. 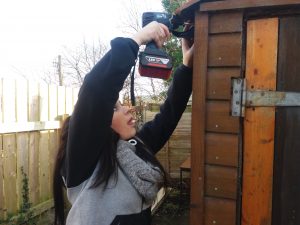 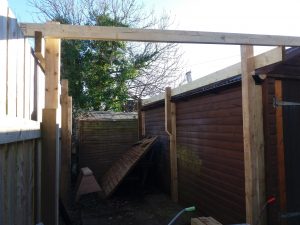 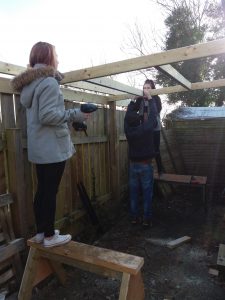 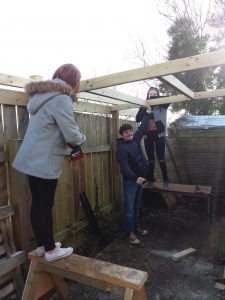